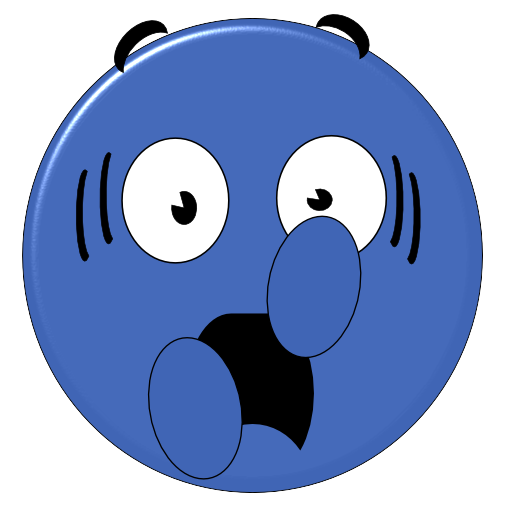 Now those of you who popped by yesterday may think the emoticon in the corner looks a lot like the one for shock, but there's a big difference here - shock is momentary and can generate many reactions, terror can last a whole lot longer!

When I think of true terror, to me it is all-encompassing fear. We're at the extreme end of this emotion, just like rage is the ultimate in anger, terror is the zenith of fear. To be terrified, a character must be facing something that makes their fear response hit overdrive. If they're human, their heart beat will race, their adrenaline will pump - maybe they feel light headed, or their muscles go weak. There are many physical responses to terror.

But then, what is happening in the mind?

Terror can be unreasoning dread, making us act both in and out of character. I think Donald Gennaro, the lawyer from Jurassic Park, who abandons the children and runs to the toilet shed is a perfect example of acting in character: his self-preservation in the face of threat, leaving the kids to fend for themselves, and then, when the T-Rex descends on him in the bathroom, we see his unreasoning terror.

Horror stories are the perfect place for terror, and, if the writer/director/actor is good, we as reader/audience, are taken along with that terror, we feel some of the thrill. Susan Hill is excellent at building her protagonist, Arthur Kipps', terror in The Woman in Black, from rationality through suspicion and doubting his own senses, to outright terror that makes him ill and separates him from those around him.

Ash, from Evil Dead 2, also goes through moments of madness brought on by the terror he feels about being alone and under attack from the demons. This is both comedic and tragic and is part of what makes this movie a horror classic.

Terror doesn't just happen in horror, though: many actors will tell you about crippling stage fright, which can be likened to terror - they can't think straight, they sweat profusely, their heart is racing; exams, too, terrify some people; a small child may find being lost in an unfamiliar place terrifying. It's all a matter of perspective, your character's perspective - play with that and you can generate all types of terror.

QUESTION: Do you like reading/watching things that scare you?
~