I just finished watching Horns, and I have to say, I was really impressed. I'm a Dan Radcliffe fan, so I'll give most of his movies a watch, but I was not expecting to like this one as much as I did. It is a great, great movie, a study of character and desperation in the surreal setting of a young man who suddenly finds himself growing horns. 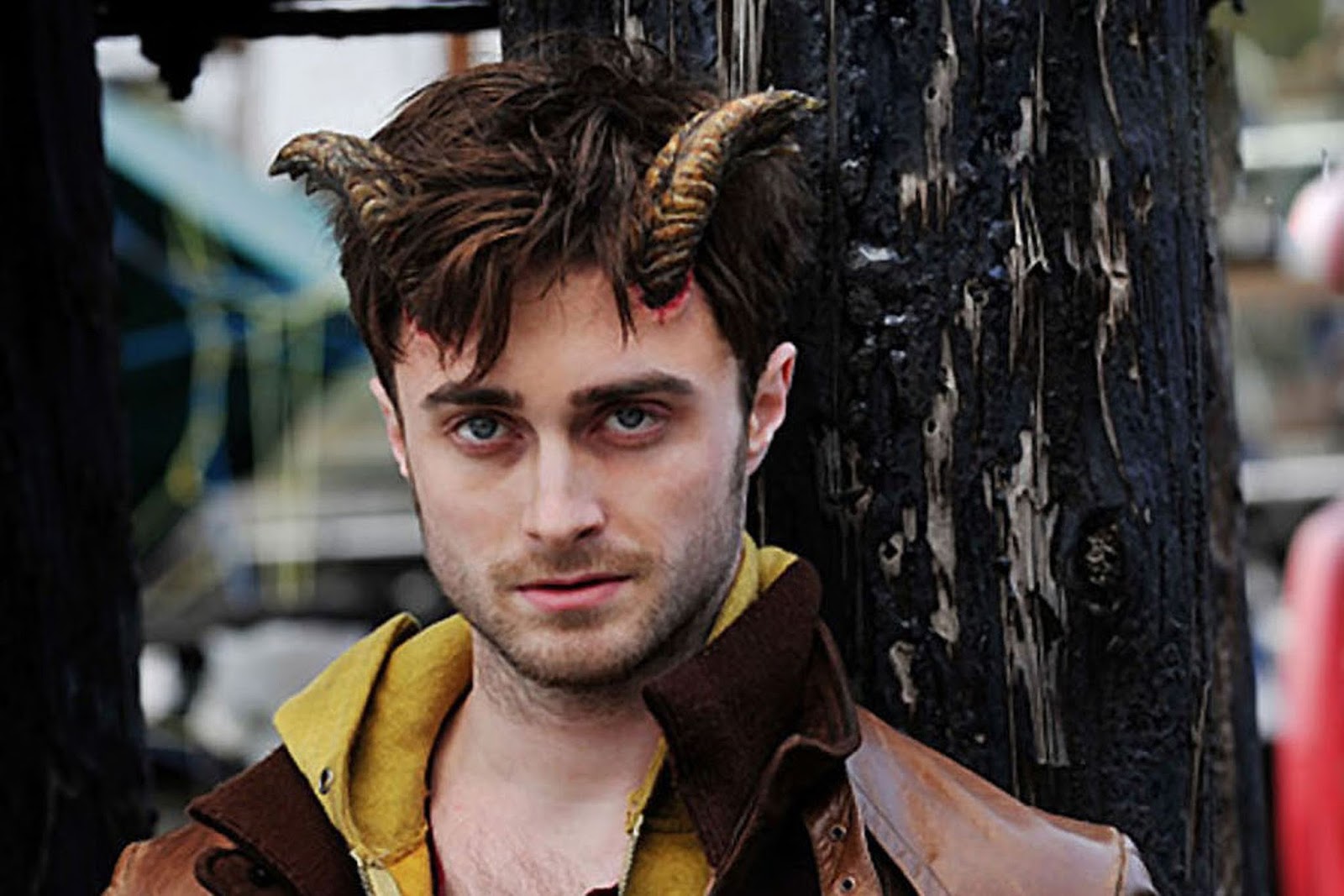 A quick summary of the plot: accused of his girlfriend's murder, Ig Perrish is pursued by the press and hated by everyone in the small town where he lives. When, one morning, he wakes up and sprouts horns.

The horns: a sign of a guilty man, or of a desperate one? That is the beauty of this story - to begin with, we don't know. I won't spoil the movie for anyone by saying which it is, but I will say that Ig's journey through the film is heartbreaking at the same time as being compulsive viewing. When we meet him, Ig is already broken, traumatised by the death of his girlfriend, Merrin, played brilliantly in flashback by Juno Temple, but, on the surface, defiant against the people who hate him. He denies his involvement in the murder, but even his own parents think he did it.

Ig is a man destroyed by love, a love that possibly led to murder, and then he grows horns. Hell of a left field thing that, could have destroyed the film played differently, but, although this movie is sometimes listed as a dark comedy, I didn't laugh, in fact, I thought the whole thing was played straight and that meant we stepped from murder mystery into surreal horror without skipping a beat. Brilliantly done, just brilliant.

The horns turn Ig into a strange kind of confessor, where everyone tells him their darkest secrets, even acting many of them out. It's unsettling and dark, but the characters still felt genuine. I recommend the scene where Ig talks to his mother.

I was glued to the film the whole way through, there wasn't actually a boring moment, even the flashbacks, which in some movies I have found tedious, slotted in to the flow of the film perfectly. Horns is an expertly crafted story and a polished film.
Posted by Sophie Duncan at 23:01 10 comments:

Recipe: Dark, White & Milk Chocolate Easter Egg Nests (fun and easy for you and the kids) 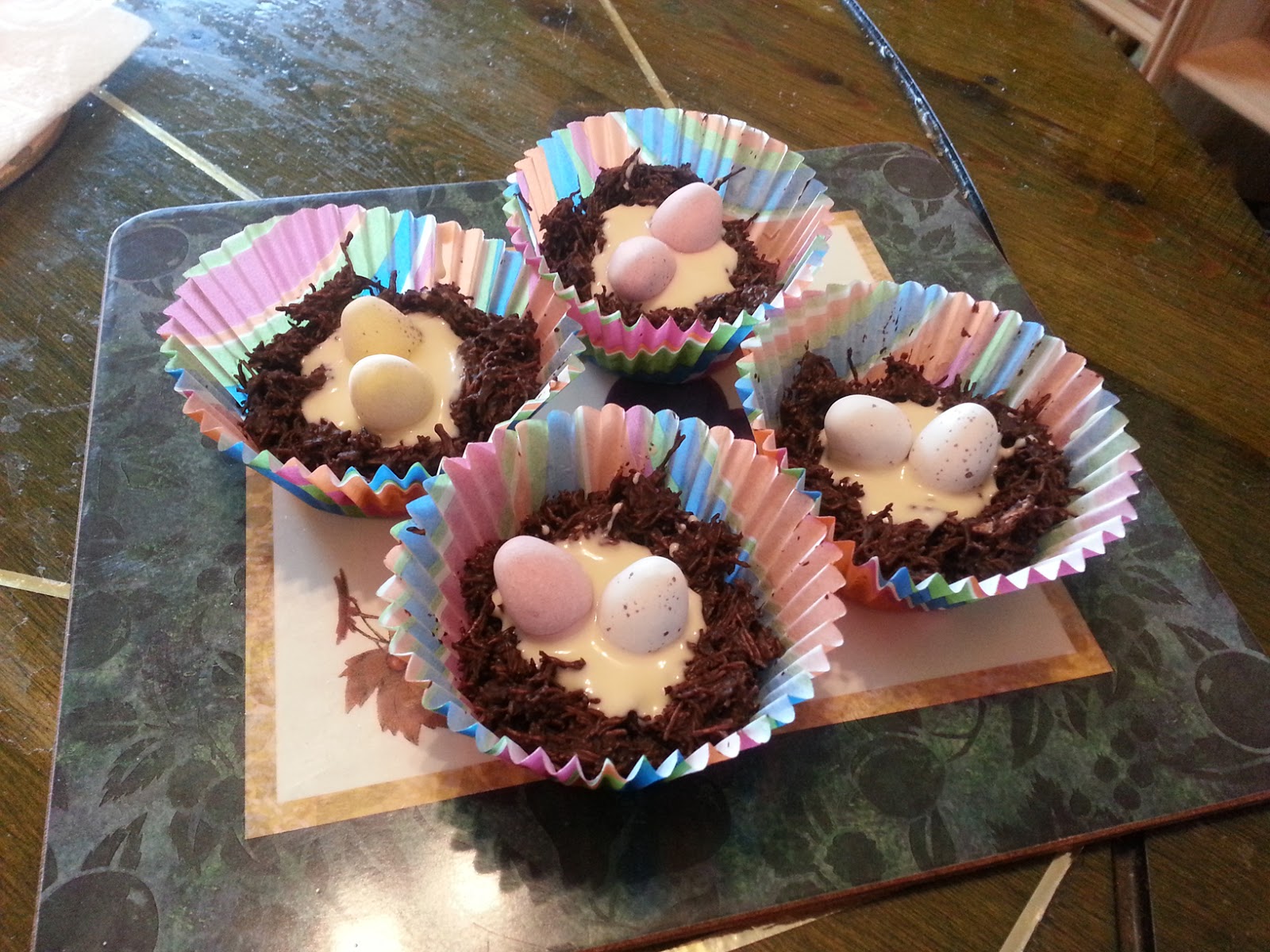 This recipe is a little twist on the classic rice crispies cakes, only they are made with Shredded Wheat to make them look more like nests (you can substitute rice cripsies or cornflakes if you want).

It's quick and easy and fun to make with kids, although you can also make them just for yourself too! :)


Ingredients:
300g dark chocolate
150g white chocolate
9 Shredded Wheat (or enough rice crispies/cornflakes to use up all the dark chocolate)
50 mini eggs of your choice (I used Cadbury's)

In a large bowl melt the dark chocolate. You can do this by putting the bowl over boiling water, or by placing it in the microwave on medium power (1 or 2 mins first and then bursts of 10s until the chocolate is smooth and runny).

Crumble in the Shredded Wheat, mixing until it is thoroughly covered in the chocolate.

Put two teaspoons of the mixture into each bun case, forming into a pattie, and make a dent in the middle of the pattie (I used two teaspoons to shape the nests).

Melt the white chocolate in a small bowl - again, you can put your bowl over boiling water, or place it in the microwave.

Place a teaspoon of the white chocolate into the centre of each nest and immediately add two mini eggs to each nest.

Leave to set for another 30 mins and they're ready to eat!

Posted by Sophie Duncan at 13:12 No comments:

A to Z Challenge 2015 Theme Reveal - Writing Emotions and Reactions

The A to Z Blogging Challenge starts soon (April 1st) and there are loads of folks already signed up, so it should be an interesting month! :) As part of the fun, I'm joining in the A to Z Theme Reveal Blog Hop, where we commit to our theme for the month!

And, so here goes!

All the links will become available to view on the days specified.

Email ThisBlogThis!Share to TwitterShare to FacebookShare to Pinterest
Labels: a to z 2015, A to Z Theme Reveal, author: sophie duncan, Blogging From A to Z April Challenge, type: blog hop

Last night I went to see The Duchess of Malfi at the cinema via a Globe On Screen production (it's like NTLive Encore, in that it's a filming of a live production, but not broadcast live) This production has been running at The Globe Theatre, London, in their Sam Wannamaker Playhouse, which, to add to the atmosphere, is lit entirely with candles! 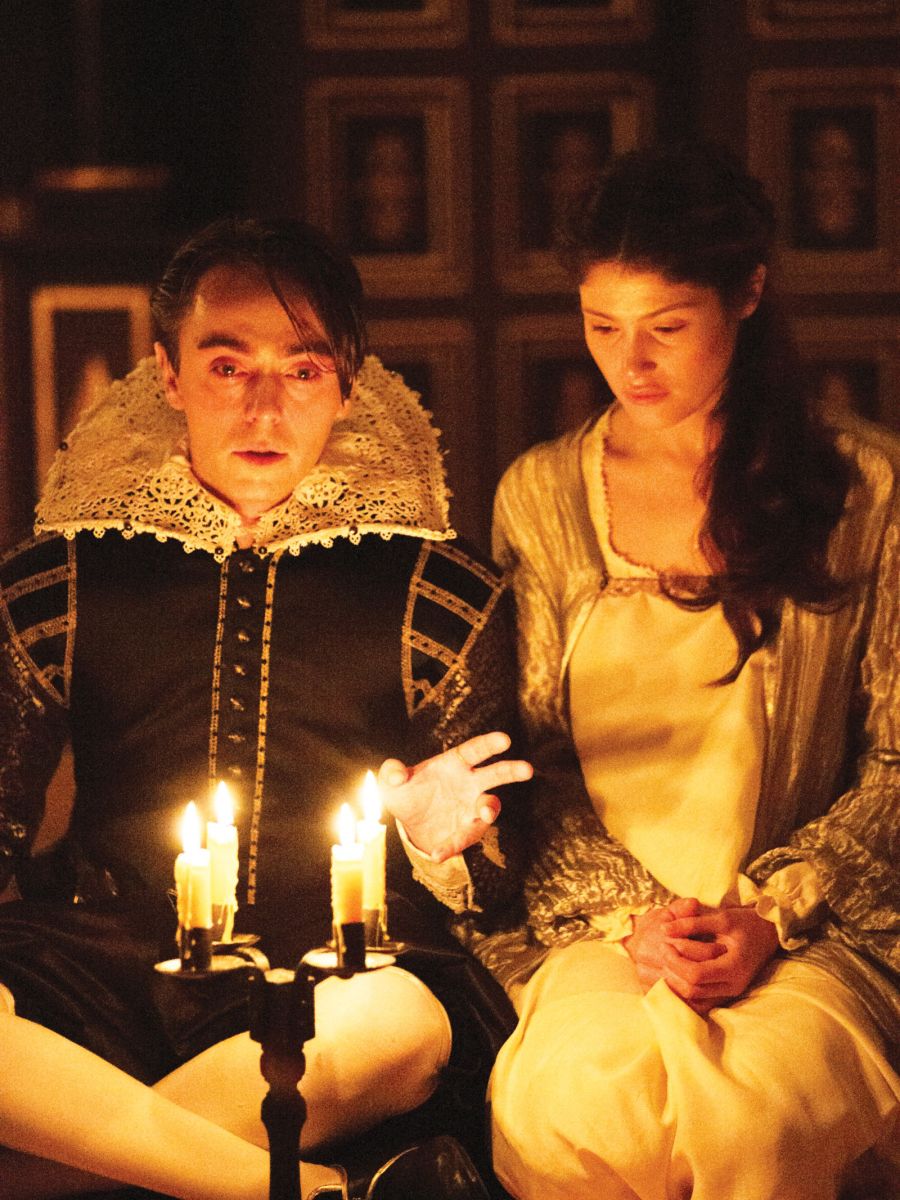 Firstly, I'd never seen a Jacobean revenge tragedy before, so I had no idea what to expect, and I have to say, I wasn't expecting to laugh as much as I did. Considering the amount of death and the foreshadowing of death throughout the production, the cast's comic timing was brilliant and I found myself laughing, even between murders!

Having said that, the opening of the play had me worried, because it all felt a little stilted - far too much enunciation and not enough performance. However, everything settled, including my ear for the Jacobean language, within about five minutes and I began to enjoy the play.

There is no subtlety in this play, the characters are full on all the time, from the love-lost Duchess to her conniving brothers, Duke Ferdinand and The Cardinal. The standout performance for me was in fact David Dawson as Ferdinand. He was scheming and slightly mad, slipping into completely mad as the play proceeds and Dawson was, at times, a stunning performer to watch.

I'm now going to dip into the plot, so if you don't want to know what happens, don't reader any further!

Today, I am happy to welcome Nathaniel Danes, author of Science Fiction book, The Last Hero. He has agreed to answer some questions! 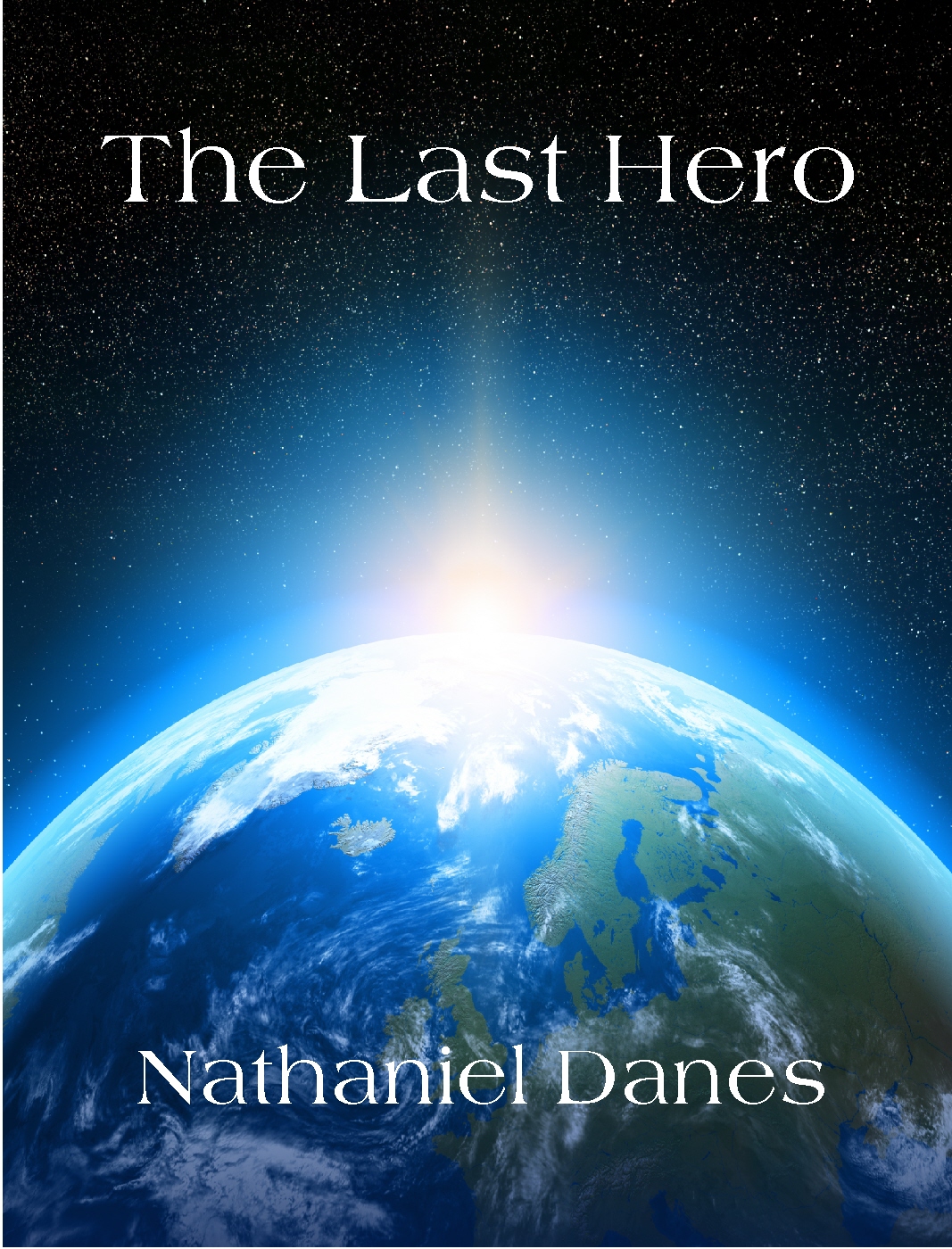 Can you tell us a little about yourself?
I'm a pretty regular guy. I like my beer and football but I also write science fiction novels. The universes I create are an escape for me. I'm losing my sight to a genetic disorder and am almost blind. It's fun to imagine world's where I don't have limitations.

Tell us about your book(s).
Right now I'm knee deep in THE LAST HERO trilogy. Book 1, The Last Hero, is out and book 2, The Last Revenge, will be out in a month or so.
The series starts off with Earth rushing to remobilize their military to defend themselves from a new alien threat. The main character, Trent Maxwell, is the last Medal of Honor recipient in U.S. history and he's tagged to lead the first counter-strike. It's hard for him to leave his daughter behind, but the stakes are too high, he has to fight again.

Writing – why?
I've always had an overactive imagination and, as I've said, I use it as a coping mechanism for my loss of vision. I always wanted to share the stories I wrote in my head but I'm also dyslexic and the idea of me writing a book was a crazy idea for many years. However, college, grad school, and a day job that requires a lot of writing conspired to sharpen my skills. Once I had the ability to share them, they demanded to be set free.

Do you have a favourite character from your book(s)? Why?
Certainly do. Anna, because she's based on my own little girl.

What is your favourite genre and why?
I love writing science fiction for a couple of reasons. One, the future is a blank canvas with limitless possibilities. That kind of freedom to dream is fun. Secondly, I believe the human race, driven by our thrust for knowledge and sense of adventure, will achieve great things in the centuries to come. I like to think about how we'll get there.

Do you have any odd (writing) habits?
I don't think it's odd, but a lot of folks find it interesting my novels are written entirely on an iPad Mini without a keyboard, 90,000-plus words all by thumbs.

If you could invite one character from someone else's books to dinner, who would it be?
Ender from Ender's Game. Who wouldn't want to talk military history with the greatest military mind in history.

Are you a dog or a cat person, why?
Dog. Never, ever trust a cat. Their just waiting to try and take over. If it weren't for dogs they just might've done it by now.

Contact with a race of pacifists convinces mankind to lay down its weapons and keep the peace. The last Medal of Honor recipient, Trent Maxwell, trades glory for the comforts of a family after the U.S. Army disbands. All that ends when an alien menace attacks the New Earth colony, which forces a crash mobilization. Trent finds himself reactivated and traveling through space to distant worlds, in order to stop this new enemy. During the century long journey of death, love, and loss, he also deals with the law of relativity that wreaks havoc with his daughter.

Excerpt:
Trent knelt down where Anna could throw her arms around his neck. She pulled against him tight and started crying again. Tears rolled down his face as he whispered, “I love you more than you can understand. I’m sorry.”

Her cries downed out his soft words.

After a minute, Trent summoned all of his strength to break free of her hold. Standing, he shared a look with Madison. She wrapped him in a loving, warm hug.

This time she did the whispering, “Remember what I told you. Make them pay.”

He pulled away, nodding as he placed his hand on Anna’s sobbing head.

“I’ll see you both again someday. I promise.” The words bound him to a promise he wasn’t sure he could keep.

Nathaniel Danes is a self-diagnosed sci-fi junkie and, according to his wife, has an over active imagination. Mostly blind, he writes to create universes where he has no limitations. He lives with his wife and daughter in the Washington, DC area.