So, thanks to buying A to Z mugs this year, I found a really great site called Society6, which is a site where artists can upload their own designs and have them sold as prints and all sorts of other wonderful things like laptop sleeves, mugs and t-shirts.

Now, I'm a photographer as well as a writer, and so I decided to join up as an artist and publish some of my photos. It takes some time to prepare the images for the site, so I only have two photos up so far:


But even if you're not into my stuff, there are some other great pieces of art on the site as well and there's free shipping on everything worldwide until 5th June 2016. So I recommend checking them out for some unusual and interesting designs.
Posted by Sophie Duncan at 21:55 5 comments: 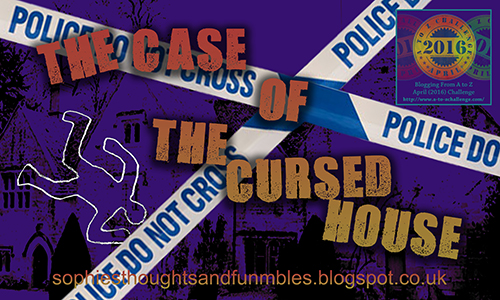 Thank you to everyone who dropped by during the A to Z Challenge. My theme this year was Murder Most Foul, which meant that I was sharing an episode a day of my murder mystery, The Case of the Cursed House, or rather the bare bones of it.

Everyday, I revealed more about my developing Cozy Mystery: descriptions of scenes; character details; locations; clues to the mystery. And, at the end of each post, I gave everyone a chance  to vote on whodunnit. So, I thought I'd share some of the results of the votes, revealing no details on who the murderer actually is...

I excluded any character who got 1 vote or less, and, as you can see, Alice Rigden, the superstitious housekeeper, was a strong contender early on and maintained her lead, with Lord Michael, the charming, but snooty Lord of the Manor, and Bethany Mortby, possibly the spurned ex, began to catch up later in the plot. This kind of info is going to be really useful to me for when I turn the notes into the full novel, because it's giving me hints as to whether I'm giving away too many clues or not enough, so thanks to everyone who popped by and voted.

All parts of the mystery are linked below if you want to go back and read it (I'm not revealing here whodunnit, so it'll still be a surprise ;P):

A to Z Reflections
This year I found the A to Z tougher than previous years, and there was but one reason - I didn't finish my posts before the start of the A to Z, which meant I was trotting to keep up. I had finished my posts for FB3X Drabblerotic, which was a minor mercy, but I dropped the ball on our other blog, the Wittegen Press posts, so I have to give a BIG THANK YOU to my sis, Tasha, who picked up that ball and did all but 2 of the Literary Smackdown posts.

Because I was running to keep up, this year was lot more stressful than others and I didn't get round as many blogs as I would have liked, but the ones I did are below. It was still a lot of fun, I made some new friends and rejoined some old! I never quite know which blogs are going to catch my attention, which ones I'll be going back to day after day, but there are always some, and there are also the lovely ones that I just popped by, but that didn't make me enjoy them any less.

The A to Z is a source of myriad wonders :).

A to Z Shout Out!

I had great fun bouncing around blogs this year. I kept a list of those I visited so I'd like to share with you some of the blogs I have enjoyed: