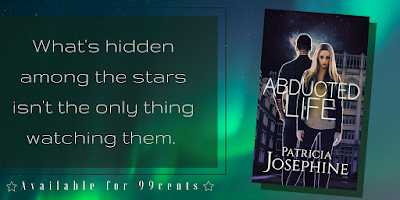 Today, to celebrate the release of her latest book, a New Adult, Sci-fi Romance, Abducted Life, I am happy to welcome Patricia Josephine to my blog, and she's talking about

The dream I had that inspired Abducted Life was about a vampire trying to escape aliens. He had the cliché vampire traits like fangs, but for Abducted Life I wanted Savannah and Evan's looks to reflect the fact that aliens messed with their genetics to make them less human––especially in Evan's case. Not so much for Savannah. I had some ideas in mind and there were a couple real life creatures that really inspired me. 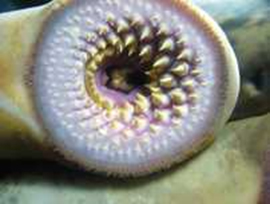 When it came to Evan and alien vampires, I had one specific animal in mind: a sea lampray. Specifically, it's mouth. I wanted Evan's changes to be something he had to cover and in doing so would make him stand out in a crowd. It also had to be horrifying. He shrugs it off in the story, but it's not an easy change to cope with as he makes it seem.

As for the alien creature, what I had in mind was something aquatic. I imagined something like the opposite of whales which breathe oxygen, but can spend hours under water. These creatures can spend hours on land, but only breathe underwater and hold their breath when out of the water. But since Evan is human and breathes oxygen, he can't breathe underwater. If he had been a fish spliced with this creature that'd be a different story. ;) Also, imagine something with a body like a crocodile, but the scaly skin isn't as rough.

Savannah Janowitz’s perfect life was destroyed the night she and her boyfriend vanished without a trace. When she reappears a year later––alone––she’s a shell of her former self. Robbed of her popularity and her boyfriend, she has no memory of what happened to her. Savannah struggles to move forward as strange, new abilities manifest.

Evan Sullivan never gave extra-terrestrials much thought until the night he and Savannah were abducted. While Savannah’s memory was wiped clean, he remembers every horrific detail. Constantly reminded of the experiments that made him less than human, Evan hides in the shadows and watches Savannah rebuild her life without him. But neither can let the other go.

When their paths cross, Savannah and Evan finally see a glimmer of their old lives return. As they face what happened to them, they soon discover they aren’t safe. There’s more to fear than what’s hiding in the stars.

Available for 99cents at Amazon.

Patricia Josephine never set out to become a writer. In fact, she never considered it an option during high school and college. She was all about art. On a whim, she wrote down a story bouncing in her head. That was the start of it and she hasn't regretted a moment. She writes young adult under the name Patricia Lynne.

Patricia lives with her husband in Michigan, hopes one day to have what will resemble a small petting zoo, has a fondness for dying her hair the colors of the rainbow, and an obsession with Doctor Who.

You can find her lurking on Twitter, Google+, Goodreads, and Wattpad. Find the latest news at her website or sign up for her newsletter. A link to all her books can be found here.
Posted by Sophie Duncan at 10:00 4 comments:

Book Review - Forensics: The Anatomy of Crime by Val McDermid

Forensics: The Anatomy of Crime by Val McDermid


I really enjoyed this book. Even though it's non-fiction, Val McDermid still weaves a compelling story of forensic science from its birth all the way to modern techniques and their both successful and over zealous use in today's courts.

Val takes us through the development of a selection of forensic techniques, including blood splatter, finger prints, DNA and more. Each technique is tested and presented with its pros and cons, and there are some interesting discussions about efficacy and also the public's perception of these different techniques. The book also investigates the role of 'the expert' and how a forensic scientist's approach to testifying can change the fate of a trial.

I think that the fact these forensics are discussed, warts and all, is what makes this book different from other books I've read on CSI. It brings them into reality, away from the glamour of TV police procedurals and into the real problems that face forensic scientists, and also their real passion for their subjects.

View all my reviews

We will also give you 2 FREE ebooks, not available anywhere else, just for signing up .

Posted by Sophie Duncan at 19:09 No comments: