Green Lantern, Rather a Good Movie in My Opinion

I'll preface this review by saying that I have never seen any Green Lantern media before, I did not know the story and am coming at this from merely having seen the movie.


Oh, and, there are spoilers in this review, so don't read past the pretty piccie if you don't wanna know. 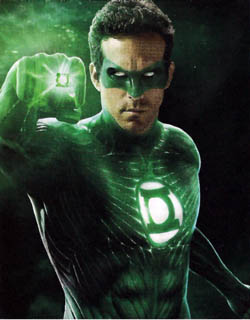 It started fairly predictably with the slightly broken male lead and oo, he's a pilot, a maverick pilot, so no surprises there then. The beginning was average for a superhero movie, or really any action movie where our all-American hero is going to be expected to save the day. However, after all the initial, this guy's a loser, he runs away from responsibility, but he's got an edge no-one else can match stuff, what made me sit up and start watching properly was when he was faced with Abin Sur. There was a second after he had been dumped on the shore by this green glow when he stared at this alien spacecraft like he was about to leg it in the other direction and then, in another heartbeat, he was scrambling into the water to help. The timing on that moment was perfect and I was a fan of our hero from that second on, even when he did the whole, I'm going it alone to save my planet speech just before the climax, which, like all such speeches in all other superhero movies, just made me cringe.

Hal Jordan: I think Ryan Reynolds did a good job on this superhero. He wasn't goofy, or sickenly all-American, or hard-edged, he was an ordinary guy who had dealt with the loss of his hero-dad by trying to emulate him and then running away when the going got tough, and I liked that about him: an understated lead. There was the odd moment of comedy, the bit where Carol recognises him behind the mask just had me giggling and I loved the line (forgive me if I'm paraphrasing), 'I've seen you naked, you didn't think I'd recognise you just because I can't see your cheekbones?' 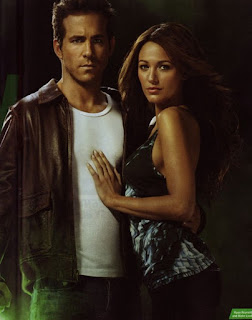 I thought poor old Hector had a rough ride, called in by the government, infected with Fear by accident, however, he played the hand he was dealt and with relish. This is where this movie revealed it's hard edge, there was no saving Hector, no redemption and I found that refreshing, even though I still felt sorry for the retiring nerd we had first met.

Talking about this movie's hard edge, Hal did not get to save everyone. Unlike Superman, or Spider-man, Green Lantern saved the day, but not all the innocent victims survived, and I'm not talking unnamed planet-fulls of folks, we saw innocent human beings destroyed by Paralax before Hal could stop him. This surprised me, although, I should have remembered that DC does tend to be darker than Marvel. I think this was the tricky line that the movie tried to walk, because Green Lantern is not as dark as Batman, he flies, he uses the power of Will to fight his battles, he's a much cleaner-cut character, and maybe this is why people didn't like it, because Hal was so understated, not the man with the dark alter-ego, nor an out and out Superman-type, but I liked that about the whole movie.

Okay, so the movie did have some timing problems, lines could have been cut better, the music could have been more dramatic, but I said it was a good movie, not a magnificent one. This movie didn't take me to the skies, but it did surprise me, and it left me winded at times, the confrontation between Hector and Hal in the secret lab is exquisitely done, if you ask me. Not your average fight scene at all. It was bits like that which made me like this movie: I was never bored.