T is for Two

Personally, I'm rather fond of the number 2. I'm a twin, y'see, so it's a concept close to my heart. Pairs, duos, other halves, this post is about the many and varied combinations of 1 and 1 in our world.

Not unexpectedly, let's start with the twosome closest to my heart, that of twins. They say that twins either attract or repel each other completely. Well, my sister and I are an example of the former, while my mother and her sister were an example of the latter.

Tash and I are identical twins and, although you can take the term identical with a pinch of salt, we do share a lot of similar traits, likes and habits. We're both computer geeks, we both love sci-fi and fantasy, vampires and ghosts. It takes a lot to rile either of us, but heaven forbid you're the person who pushes us over the edge, it isn't pretty! We're both writers and we both have the habit of writing each other's stories - yes, you read that right, we do a twin thing where we'll both come up with the same story outline completely independently - it can be quite annoying! ;P
Although she can be the most annoying person in my life sometimes, I love Tash, we are connected very deeply and, having tried living at distance from her, I can quite equivocally say, I don't like it. We now live about 100 yards apart on the same street and that's how we like it.

It's not really surprising that two's are important in the human world, after all, we are bilaterally symmetrical as a species - 2 hands, 2 feet, 2 eyes, so it would be pretty daft to sell gloves in threes, or for granny to knit a quintet of socks. Yet, like fraternal twins, not every pair has to be identical. Look at knives and forks, for example, they normally come as a pair to aid us at meal times. Two totally different implements, but one compliments the other. Which leads me into a not-so-subtle segue that, this is not dissimilar to the opposites attract kind of buddy movies/TV shows. 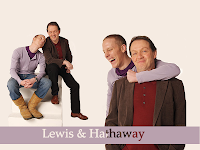 Lewis and Hathaway, both police officers, but one's an intellectual, a failed priest, the other a down to earth Geordie, with a taste for Wagner thanks to Morse's influence. On the face of it, this could have ended up an antagonistic relationship, however, it ended up being one of the most endearing and best written cop pairings on British TV. These two square pegs in the round holes of modern policing complimented each other both as investigators - Hathaway's genius and Lewis' nowse demolished case after case - and as friends - they understood each other. I will miss joining them on cases now the series is over.

Another not so deep, but equally well-written pair of investigators is Rizzoli and Isles. The plots of the show are not complex, but these two characters are entertainingly written and make me smile and giggle and occasionally tear up. I must actually get round to reading the books the show is based on to see if their exchanges are as well done as the scripts. These two are definitely friends first, colleagues later, and Rizzoli's one-liners in the face of Isles' complete incomprehension of social norms are just so much fun. ;)

Cop shows seem to lend themselves to these types of buddy relationships: Hawaii 5-0, Starsky and Hutch, Alien Nation and many, many more. Superheroes less so, because, in a lot of cases, we're dealing with a lone wolf and plucky sidekick, like Batman and Robin, where the dynamics are definitely skewed towards the single hero.

The only time I've see pairs of superheroes lately has been in Marvel Avengers. Some of you may blink at me for that one, but, even though this was an ensemble movie, some pairs most definitely formed, or already existed within the team: Bruce and Tony bonded over science; Natasha and Clint already had history that pulled them together. And of course, there were the relationship pairs. It was a pity we didn't get to see more of Pepper and Tony, but we'll just have to wait for Ironman 3 for that ;). Steve and Bucky should also be the core of Captain America 2 with the classic trope of old friendships clashing with new loyalties.

Then, of course, there are the pairs that are total opposites, good vs bad. Where would we be without Professor X vs Magneto, Holmes vs Moriarty, Harry vs Draco? 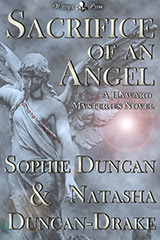 Pairs work well in stories, they can drive a plot on with conflict, or allow for discourse and therefore dissemination of plot without the need for swathes of info-dump all while maintaining an intimacy between characters that is difficult to create in larger groupings.

They are also generally fun to read. :)

I'll come full circle now, back to my own attachment to pairs, because, when Tash and I decided to start writing professionally, we wondered what we could bring to stories that would be unique to us. We decided that one thing would be our insider knowledge of being twins. Thus were born the Haward Twins, Remy and Theo, police officers in a magical branch of the British police force investigating murder with a sorcerous twist.

We each write one of the pair: Remy, who is a detective sergeant, a free spirit and packs a wallop in the magic department; Theo, much more staid, a detective inspector and the only person who can keep Remy in line. And each of them has a little bit of us in them, the part that understands being a twin, the closeness, the innate knowledge that someone always has your back and also the horror of that bond ever being broken.

Book 1, Sacrifice of An Angel is already available, and we're in the planning stage of book 2. They take a lot of effort, since writing with a partner has more overheads than writing alone, but I think we're both rather attached to our fictional detective twins :D.

Do you have favourite pairs in your life?