H is for Home

Home
Is
Where
The Heart
Is 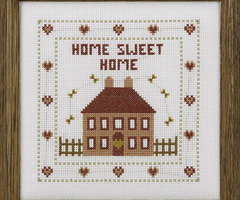 I've lived in various places around the south of England and I've both rented and owned houses in them, but I have found that bricks and mortar do not a home make and I am definitely a home body. I enjoy business trips and holidays, but it's when I'm at home that I'm really happy.

So, if it's not the house, then what makes a place home for me? Well, my travels and my experience have told me that it's people. I don't have a Mr Right at the moment, but I am very close to my family, my parents and my twin sister. Before she married, it was me and my sister Tasha against the world. We were student apprentices together, we studied at the same university for both undergrad and postgrad degrees. However, when she got married, that changed and I headed off to my first job on my own at 26.

I spent two years in Wiltshire and they were the most lonely two years of my life. What surprised me was that, after I'd given up on that job and taken up another position in the same county at least as my family, Tasha admitted to me that it had been the worst two years of her life as well. Married, or not, we still want to be close to each other.

I tried the whole house thing again when I moved back to Kent, living down near where I worked, only about half an hour from my twin and my parents' places. However, even then, I discovered I was spending a lot of time travelling up to be with them and I preferred it when I was close with them. I finally came to the conclusion that I'm not an independent person, not when it comes to domicile arrangements anyway :). So, when my father came to retire, we all had choices to make.

My father is a Church of England Vicar, which means his job came with a house. When he retired, that house went away and no-one is going to give a mortgage to a senior citizen. Thus, even with savings, buying a house was going to be a problem. I had a house and I wasn't interested in living in it, I wanted to be still closer to my family. Thus, the decision was easy. I sold my house, we pooled our resources and we now own a bigger house suitable for both our sets of needs just up the road from my sister. Job done! :D

Some folks may baulk at moving back in with their parents as an adult, but I can say it's nothing like living with  them when I was growing up. I've done the independent thing, I've explored my world and I continue to do so from time to time, but I have a base that I can come back to and, at this moment in my life, that makes me feel safe and comfortable.

Who knows what the future will bring, but, for now, I'm a home body ;).