I mentioned earlier in the month that I have been mulling over expanding on a short story/novella universe, The Hidden War, which I created when writing a couple of stories for The Wittegen Press Giveaway Games in July 2012. My first step was to start serialising the third story, A Fork In The Road, on this blog (part one was published under K is for Knowing and part two was published under Q is for Questions).

And while beginning book 3, I also began to prepare for releasing the original two stories, The End Of The Journey and A New Path, as standalone ebooks.  This involves all the usual rigmarole of re-editing (I never ignore a chance to do another pass on work when I'm going for a new edition), formatting and cover design. And, while I'm still slogging away at the editing and formatting, I'm excited today, because I get to reveal the cover of the first Hidden War ebook, The End Of The Journey :D.

So, without further ado - ta da! 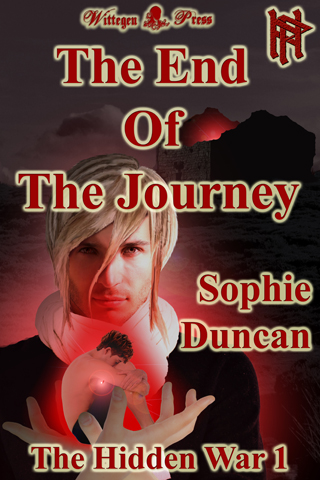 The cover shows my two protagonists, Zac Kithrall (dark) and Damon Wulfres (fair), young men on opposite sides of a demon war, or at least, that is what the rest of their people think when Damon, working to his own agenda, kidnaps Zac and goes on the run from both sides. The image portrays the dominance Damon has over Zac at the beginning of the story and suggests something a little sinister is going on.

Oh yes, and I suppose, I am also revealing the Hidden War logo, the interlaced Hagall and Wunjo runes on the stone tablet at the top of the post and also the top right corner of the book cover. With a series of books, I always like a common visual element to link them, and so I chose runes, since they feature in the books and they suggest the ancient backdrop to the Hidden War.

Well, now I have to get back to that editing :).