New Novel: Death In The Family By Sophie Duncan 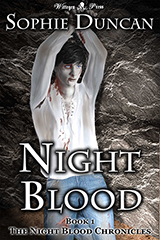 Title:  Death In The Family

Leaving a good London school with solid prospects, Tom Franklin has the world at his feet. Yet one thing has always haunted his perfect life: his dreams. When Tom discovers that the nightmarish images of dark places and even darker instincts are in fact repressed memories from his early childhood, he must face the heritage from his birth-father, a savage vampire known only as Raxos.

Realising his memories are his only hope of controlling his awakening instincts, Tom returns to, Coombedown, the sleepy, Cornish village in which he was born, unknowing that the night-breed in his veins will lead him into danger.

"Death In The Family" is a young adult, paranormal novel.

This is the first story in the "Heritage is Deadly" Series.

You do not need an eReader to view this publication; there are Kindle aps available for most devices as well as formats for other eReaders, devices and PC.

Tom could hold on no more, he let out a gasp of breath and then his world shifted into one of silver-greys. Knife and fork went skidding off the plate as Tom grabbed the large hunk of dripping beef in both hands and lifted it to his mouth. Urgently, he sunk his teeth into the thick flesh. Blood and meat hit his tongue and Tom almost melted with relief. His senses closed around the bite, his body settled, aches and pains fading almost instantly, and there was no stopping him after that.

Sharp teeth and sharper claws were all Tom needed to rip the steak apart, devouring every decadent morsel like he hadn't eaten in weeks. Every mouthful made the power in his belly spin faster, until his senses were almost breaking out of his body in the way they touched the world. The sensations were divine, intoxicating and Tom grinned around his meal, lost to the sheer satisfaction.

Yet, the meat did not last long and, gasping away the intensity, Tom looked down at his empty, bloodied hands, reality sinking back in. He could feel the juices running down and dripping off his chin. He was a mess. Yet, Tom could not put the genie back into the bottle, and, despite his very human disgust at what he had done, the night was still in him, seducing his senses.

Conflict was nothing new to Tom that day, and he chose to stall it with immediate considerations. Tom hated being dirty. That ingrained part of his character helped hold back the clash in his split psyche and, climbing out of bed, Tom headed to his en suite bathroom. He ignored the light as he went in and kept his head down, not wanting to see the sight he had made of himself. He knocked the mixer tap with his elbow and quickly ran his hands under it. Then he splashed his face, another sort of relief hitting him as he cleansed his skin of the evidence that he had lost control.

Yet, water could not wash everything away and Tom could not quite avoid the large mirror above the sink. His vision remained shifted, so the low light in the enclosed room could not help him and Tom looked. What he saw froze him with both the familiarity of it and the newness. His face, his messy brown hair, yet, it was his eyes that drew him in; at first, alarmed, he thought they were glowing. Trying to stay calm, Tom grappled onto any facts he could remember from his talk with Dr Cheringham. To be honest, he didn't remember many details, but enough came back that he stopped himself running away and hiding under the covers again with the knowledge that the cells in his eyes were just shining as they absorbed as much light as they could.

Shock dissipating, Tom dropped his gaze and stepped back from the sink. His hands and face were now clean again, but his shirt was covered in gore, so he hastily pulled it off. He heard the material rip as he misjudged his own strength and, throwing the clothing at the laundry basket, he could not miss the thick, sharp claw-like nails that had caused the damage. It was all too much too quickly and, keeping his mouth firmly shut, Tom retreated from his reflection.

Sinking back onto the bed, he curled up into his protective ball again, closed his eyes and tried desperately to bring the world back under control.

If you read and enjoy this title, please consider reviewing it at Amazon, or Smashwords, or one of the other eBook shops. Thank you.

And if you'd like to help a small, independent publisher:

Death In The Family: http://www.wittegenpress.com/deathinthefamily