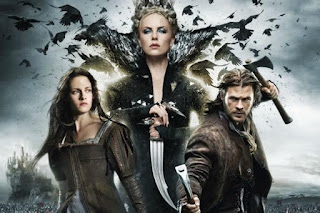 Went to see this movie on Tuesday. First summary thoughts, turn your brain off when you watch it, but if you like high fantasy, you'll probably enjoy it. Now, why do I say that.

Well, this movie is a fun romp through the Snow White fairytale, darker than Disney, with a vicious streak that harks back to the older versions of the stories of The Brother's Grimm. However, not as dark as I think it would have liked to be (but then it was a 12A). Having said it's a fun romp, I mean it, don't try and think too hard, because, hey it is a fairytale, like, the fact that Snow White is locked in 'The North Tower' from about  age 11 until she escapes at approx 17, no company, no teachers, no home comforts and yet, she comes out the other side an eloquent, fairly well-adjusted modern young American - not all due to Kristen Stewart's inability to act her way out a paper bag, either, the script writers really have to answer for that too.

Chris Hemsworth does not really over-exert himself on the acting front either, but, being a girlie, I can appreciate the bod (although I would like to lodge a protest that we didn't get to see enough of it) and so I'll forgive the ever-changing accent, that I think was meant to be Scottish, and the fact that, he was a huntsman, he had an axe, but every time he swung it, I kept expecting lightning to come down from the sky ;P.

Most of the good guys were a little limp actually, even the dwarves, and there was a strong cast there from Nick Frost through to Bob Hoskins. However, I would happily watch this movie again for the bad guys. Ravenna, the evil queen, and her brother, Finn, had the best dynamic in the story. A little suggestion of incest,  complete devotion, a shared anger and the pair of them could act.,Charlize Theron, especially: she walked the tight-rope of batshit insane and reasoning megalomaniac really rather well - she had her reasons for what she was and they more or less made sense. Actually, I'd have liked to have seen more of the siblings' back story.

Talking of back story, that is where the movie suffered - pace. There was far too much navel contemplation in the middle and it took ages to get from the queen's castle to safety with the Duke, and but a flit of an eye to get back...hmmm...There's a whole chunk of time where Snow White and our heroic huntsman stay in a village, that, inevitably, gets burnt to the ground by the bad buys. The only point this whole section makes is that The Huntsman wants to abandon Snow White, which he'd already done once anyway (and come back of course), so why do it all again and spend 20 mins labouring the fact?! If I had been the editor of that story, the 'little darling' would have been ripped straight out, because it killed the pace. There was a whole bit with fairies and The White Hart as well, that, frankly, either they should have got rid of it or tied it in a lot better. I might have suggested replacing both those sections with Evil Queen backstory, of which we only got hints and about 30s of flashback - that would have been far more interesting!

Having slammed the movie a bit, I will admit, I did enjoy it, for all the wooden acting and odd scene choices. It could do with a director's cut to prevent the audience slittings their wrist from boredom in the middle there, but it had something that kept me watching. And, as an aside, they set up quite a nice little love triangle at the end, which is a red rag to a bull for any slash fans :).
Posted by Sophie Duncan at 13:24