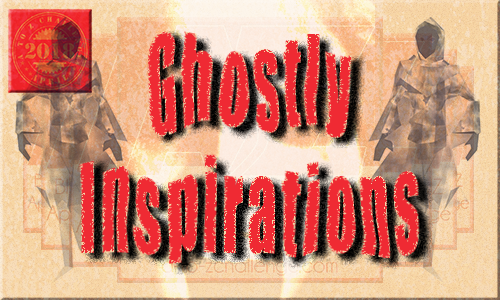 Welcome to my offering for The A to Z Blogging Challenge 2018.
My theme this year is Ghostly Inspirations:
a collection of spirits that have been prompted by my encounters with places and times. Some are spooky, some more about atmosphere. I'll be describing each inspiration and the phantom that came to my mind, and then I will share a drabble, which I hope will entertain. :)


Disclaimer: The places and experienced I have used for my inspiration are real, but my ghosts and drabbles are complete fiction, linked to nothing and no-one, alive or dead. When writing about my inspirations, I may have changed names and obfuscated specific details to 'protect the innocent' :).

Y is for Yellow

Inspiration:
Late last year, my great uncle died and I attended his funeral with my family. The crematorium was in Hasting Cemetery, which I had never been to before. We arrived early and decided to take a walk around what was an expansive and very peaceful place. We walked along wide avenues between the group of graves with their many and varied memorials and beautiful trees. In the bright winter sunshine, the cemetery was peaceful and calming.

Up the far end, we came across a section where memorials were smaller and we realised we were in a war graves section. The poignancy of that has not left me and began to think about those who died in the Great War as it was called. Young men, barely more than boys, and the harsh fate that awaited them, whether they went over the top, or worse, if they were charged for cowardice. The unfairness of those charges as we look back with modern eyes is my inspiration for today.

Ghost:
Monty was 15 when he faked his age and joined up to go and fight in France. He had barely been 16 when it had all become too much, He had faltered in the face of the enemy and his commanding officer had shown on mercy. Shot for cowardice, he had stayed with his own body, lost, afraid, a child not knowing what to do until his family had claimed him and brought him home. His age revealed, he had been buried at home on the south coast of England, overlooking the sea, among the other soldiers, no-one mentioning the disgrace on either side.

Carol strode up through the silent cemetery, the early sun on her tense shoulders as she headed directly to where she needed to be. This was not her first visit, but she hoped it would be her last as she headed into the longer grass around the small headstones of the war graves. Her eyes settled on him immediately, a boy in uniform, curled around his knees beside his marker.

Carol dropped to her knees in front of him, brandishing the proof.

“Monty, you were forgiven,” she whispered.

Monty’s gaze widened on the paper. Hope in his eyes, he faded.

Other paranormal and spooky stories by Sophie Duncan.

In The Event
of Death

The Need In Me

The End of
The Journey