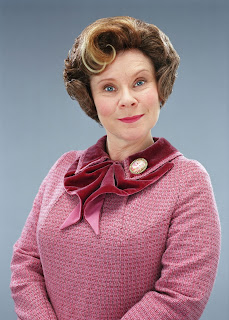 I ummed and ahhed about whether to write about Dolores Umbridge from Harry Potter today or not, because just thinking about her makes me start grinding my teeth. She is, in effect, the perfect monster. She represents all that is bad and petty about human beings and I would gleefully swing for her!

For those who don't know her, Dolores Umbridge is introduced at Hogwarts as the Defence Against the Dark Arts professor, always a position to be wary of in any Harry Potter book. She out does them all - even Snape - for her vicious, vindictive, petty-minded and down right evil actions.

Umbridge is cruel and abusive of the students at Hogwarts, especially after she becomes headmistress. She uses her position to belittle, to demean, to hurt and to lord herself over those who have no power to fight her. She is the worst of humanity, a tinpot dictator who revels in controlling her own little world. Her world view is the only one that matters, and those who disagree with her suffer the consequences, which, unsurprisingly, includes Harry.

Voldemort is a nightmare. Lucius Malfoy is a pure-blood bastard. Belatrix is a few spells short of a spell book. Yet, in my opinion, Umbridge, with her fake sweetness hiding her ruthless need to control, and her indiscriminate use of insidious force on those weaker than her, is the worst of the lot. And the reason, because we've all met Dolores Umbridges in our own lives. They are people who can happily ignore the greater good to protect their own little empires. They obfuscate. They derail. They take everything as a personal attack. They may not have quills that scar the user who is made to write lines with them, but they can be just as nasty.

I'm going to stop now, or my blood pressure is going to blow. Can you tell I really, really dislike Umbridge?

Is there a character that, although they aren't the ultimate threat in a story, make you want to yell and throw things?
~