A to Z Emotional Reflections 2015

So, the A to Z Blogging Challenge is over - congratulations to those who got through the entire month, it was fun, but exhausting, wasn't it :).

For those wondering what I'm blathering on about, the A to Z Challenge is a blogging challenge whereby anyone mad enough signs up to blog every day for the month of April (except Sundays), and each blog post is inspired by a letter of the alphabet.

This is my 3rd year doing the A to Z, and it is always great fun. It's hard work preparing the posts, and a lot of effort goes in to visiting other folks' blogs, making friends and joining in the main part of the challenge in April.

There are two things, I think, that helped me this year: preparation and a theme. I had three blogs in the challenge, this one, which is my personal blog, Fantasy Boys XXX, and Wittegen Press, both of which I run with my sister, Tasha, and each of them had their own theme. I and Tash actually started discussing the A to Z in February (yes, that is how much prep goes into the marathon that is April A to Z). We decided on our themes, and we started making lists of words and ideas that went with those themes. On the sites that we shared, we them divvied up the posts so we had half each to work on.

Once the themes and post titles were in place, then we started designing banners and formats for each theme which would draw each post together and give them a common identity, and created the skeleton posts. These skeleton posts gave us permalinks we could put into the Theme Reveal posts in March. I also designed the emoticons that I used in my posts, since I wanted them to be unique and fit with the colour scheme.

Only then did I start writing my posts and I spent the end of Feb and all of March dipping in and out of them, because I have a day job and only so much time to work on the posts. That meant, that when April came around, I only had to concentrate on visiting other blogs and answering comments on my own, which took me about two hours a day.

Blogs I visited and enjoyed (in no particular order). I'm sure there are some people I've missed out, because even though I kept a list, I wasn't perfect, especially towards the end - just know that if I left you a message on one or more of your posts, I liked your blog, thank you for making my April unusual and entertaining :). There was such a wealth of different subjects this year. I learnt about Cornwall, I read lots of wonderful flash fiction, I learnt about beads and what an obsession they can be, and those are just a few of the subjects, along with disasters and photo-thoughts and music and many more.

Well done to everyone who took part.
Thank you to all the teams of supporters and organisers.
See you again next year! 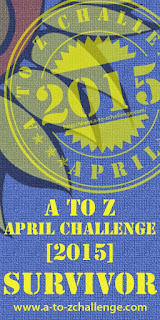