Today, and tomorrow, I am happy to welcome author, Chris Votey, to my blog to talk about the creation of secondary characters using tarot cards as a developmental tool. So, without further ado, over to Chris.

If there is one thing I love, it is creating characters. I consider myself a character driven author, in that my characters tell the story. The flip side to this is a plot driven story. Most people make a balance between the two, as do I, but have a preference of one over the other. Though some are able to have a great plot and great characters all in one.

Creating powerful and complex Protagonist and Antagonist is second nature to me. When I create them, I think of their strengths and weaknesses, virtues and vices. If my story involves a very small cast of characters, I am set.

One of my challenges is creating a large cast of characters. The difficulty I have is that when I create the Main Character, Protagonist, or the Antagonist, that I create them often as what do they need to be for the story to work. Secondary characters can be regarded as such, but it tends to make them flat and uninteresting.

In light of this, I decided that I wanted to use tarot cards to create characters. I used Tarot cards because they are 78 cards (in most decks) that describe some sort of state of transition for people. Being a video gamer myself, I often look at Tarot cards as having a complex main story with 4 side quests that intersect quite often.

Now, it doesn't matter what deck you get. Just note that there are different interpretations to cards from deck to deck. They tend to have similar meanings, but there are distinct differences. Just so you know, I am using the Gilded Tarot deck.

First, we need to put our cards in this layout, in this order (order doesn't really matter, but I tend to be a stickler for order). 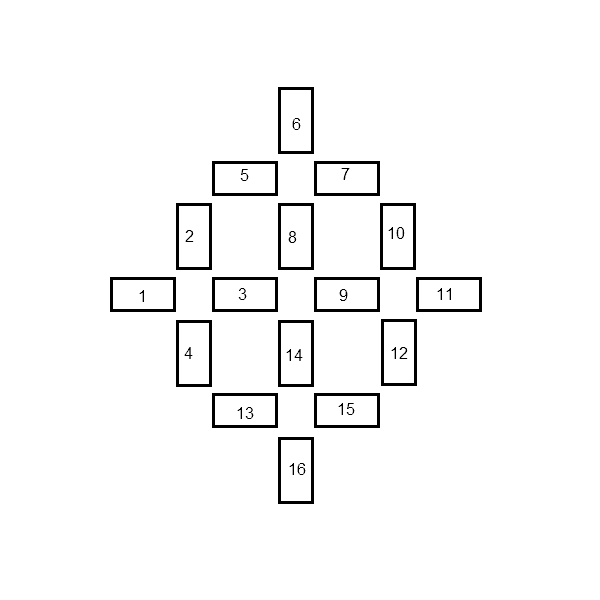 This is the basic spread. I do love the symmetry. However, this is anything but simple. Most spreads, the place of the card has a specific meaning and then the whole spread has an overall message or story to tell. This spread is different in that a card interacts with other cards to get a general idea across and the entire spread tells a lot of general ideas to create a complex thought.

This spread makes use of 4 bases, 1 inner core, 1 outer core, and 4 pillars. In essence, 10 different ways to interpret the cards. Let us start with our 4 bases. 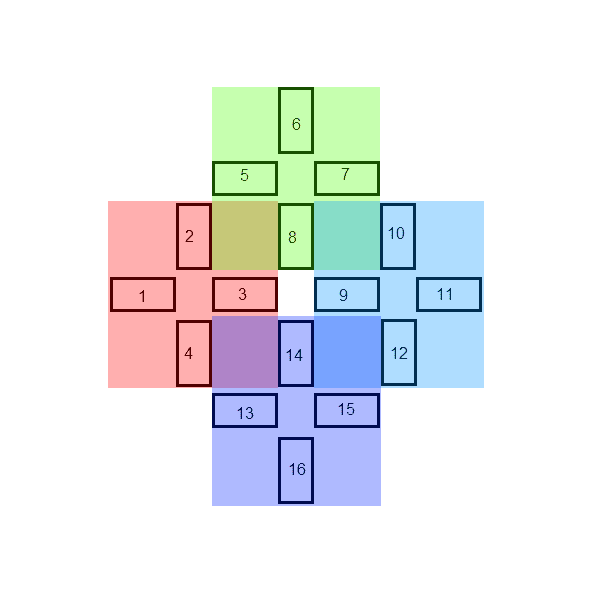 The image shows how the bases appear in the spread and you can see overlaps occurring. The colours I chose were at random, they have no added meaning. This was done for your benefit so you can start to see how this works.

This block represents Super Ego. Basically what we are taught that shapes us, whether through family, conflict in our lives, or society exerting its control.

1. Character's Past - Generally this represents all of childhood. It may reflect on how they were raised, who their parents were, or a major event that happened growing up.
2. Character's Conflict - Every character believes they are the Main Character of their story, and this is their personal conflict they are dealing with.
3. General Characteristic - This is a representation of who they are in general. All of us have a general trait about us. It is all the little things in conjunction with this trait that makes us a complex person. This can be strengths or weaknesses, or overall sense of who they are.
4. Character's Aspirations - We all want more for ourselves and know that what we have now is not all there is to life. What are their goals, what are their dreams?

This block represents the Narrative of the story. If you are creating secondary characters, you generally have an idea of what the story is about. Though the magic of this process is that you can learn more of what the story or characters are as you create new ones.

9. Drive - What pushes the character forward, what do they lust after what gets them out of bed in the morning?
10. Ideas - What are their basic thoughts about, what plans to they have for life or conflict? When they daydream, where does their mind go?
11. Fears - At their core, what are they most afraid of?
12. Beliefs - What to them is the highest form of being? Is it God, love, money, or something else?

This block represents the character's ego. Ego is described as a set of functions of self that give us judgement, tolerance, control, planning, and defence.

13. Skills - What are they skilful at, or rather, how skilful are they?
14. Quirks - What special thing about them makes them who they are? Namely, virtues or vices.
15. Values - What do they hold in high regard? What do they value above all else. Whether of self or of others.
16. Vulnerabilities - What are the weak to? What holds them back? What is their kryptonite? What will destroy them if it is lost?

Once we have those in place, it is time to design our character. While these blocks tell gives us an idea of who this person is, it doesn't really tell us how all of these relate to each other. This is where many personality tests fall short. Tomorrow, I'll show you an example reading and talk about how to use the inner core, the outer core and the 4 pillars to flesh out your character. 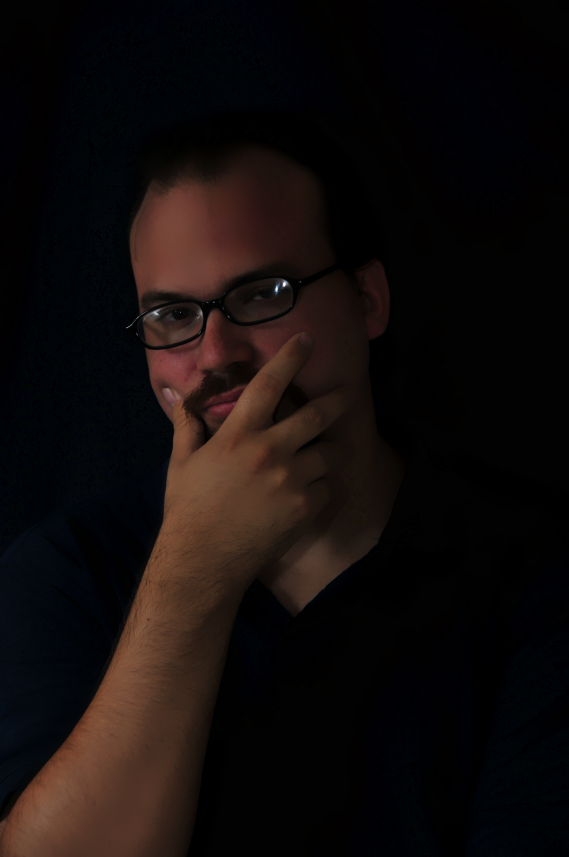 Christopher D. Votey was born in Dayton, Ohio in 1980, first son of Steve Votey and Jolene Knight (née Nichols). He is a college graduate in Computer Science at Collins College in Tempe, Arizona and has worked in the computer field for 10 years. After a debilitating work injury, Chris decided to take up writing, producing 2 books.

Chris currently lives in Mesa, Arizona awaiting Social Security disability and working to recover from his condition of Post Concussion Syndrome to return back to a normal life.

Terran Psycosis:
A man who thinks he is an alien finds himself in a mental institution. He has been visited by many doctors, but none of them were able to help him. The hospital has brought in a specialist to try to get some answers. This specialist is the top of his field and he may be able to unlock the secrets of the patient and be able to answer: Is he an alien, or simply a man seeking attention.

http://www.amazon.com/Terran-Psychosis-Cosmic-Revolt-Christopher-ebook/dp/B00IGY0KI4
Posted by Sophie Duncan at 00:00