Thanks to Soph for hosting me today. We weren't officially paired for the BBF, but she needed someone to fill a slot this morning so I volunteered :). That's what sisters are for.

So since this is a favour for my sister I thought I'd write about us, or rather about us when we write together. We're twins so what could be easier? We must have the same writing habits, right?

I made a little graphic to illustrate the biggest hitch when we write together. I write whatever comes into my head at the time, planning only enough to make it make sense and bouncing all over the story. Y'know, the exciting way of doing it! Sophie, on the other hand writes in a straight line from beginning to end *yawn*

. I mean, how can that possibly be interesting; I really don't know how she ever finishes a novel. 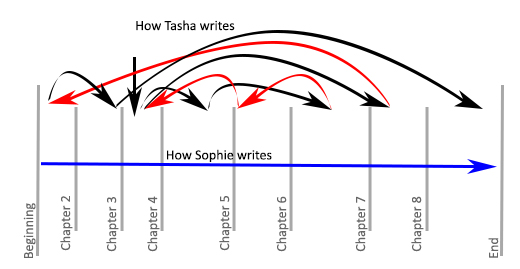 The second little issue is planning notes. Mine tend to look like this:

<<NEW SCENES HERE - add something in about how dragons breed>>

Sophie's are more along the lines of 'OMG she just almost wrote the scene, why didn't she just write it straight away' heaps of text that make me shake my head in wonderment. (She's a project manager some of the time - you'd never guess

So Soph and I write a series together called the Haward Mysteries. It's a set of crime novels with a magical twist and our protagonists are Remy and Theo Haward, detectives in the magical division of the police force. They have to figure out if a crime is magical or a setup, keep the general public from finding out about magic and figure out who did what to whom; think Harry Potter crossed with Midsommer Murders. They also happen to be twins, because we thought, what the hell, write what you know

Given the smidgeon of difference between the way we write we had to come up with something that didn't drive us both crazy (although some would say it's far too late for that), but that worked for us both.

So the first thing we decided is that we'd each take a Haward and they would be ours and ours alone. Okay, so maybe that sounds a little ominous, but it works.

Then we Planned (and yes it deserves a capital letter because you have never seen my sister when she gets going on a Plan).

Now I do have to admit, Soph's organisational skills might have been just a teensy bit useful for this stage. Not that we have a wiki for all the plot/character/background/magical and misc details or anything like that. That would be way too nerdy (okay, yes we were both programmers at one time and yes we do have a wiki).

Of course this didn't get us away from the problem of my butterfly and fun approach vs Soph's stodgy beginning to end idea. So what we did was break down the plot of the first book into scenes and each of the scenes was assigned to Remy or Theo alternately. We then decided on all the important points that were needed in each scene, for example if we needed to explain how tracing magic worked we'd add a note to that scene.

Once we had the whole structure we then set off writing. The main plan was I'd write my scene then Soph would write hers etc, etc, etc, but y'know, boring! Which was why we had the whole thing planned so I could still bounce around, I just had to make sure the scenes Soph got back were in order

. I do admit I did have to edit some scenes when I received Soph's, but then I do that anyway as I bounce around when I'm writing me own because I change my mind.

It's a compromise and involves a hell of a lot more planning then I normally get up to, but ... okay ... maybe a little ... it can be fun to change it up sometimes. Stepping outside a comfort zone can be good for a writer *repeats to self several times* ... honestly it can.

I love my sister, honestly I do, but there were moments while writing book #1 (Sacrifice of An Angel) that I really wanted to kill her. It's probably luck I don't have magical powers like my protagonist.

We're about to start into writing the second book in the series in the next month or so. If you hear a news report of a small scale explosion in South East Kent, you'll know why

The Haward Mysteries
"Harry Potter (with grownups) meets Midsommer Murders with a magical version of C.S.I. thrown in for good measure." - Rob Drake

Remy and Theo Haward weren't expected to be police officers, they had trained to be Magical Technicians (MTechs), a respectable job for any Natural Magic User. However, after a traumatic attack left Theo fighting for his life, they chose to join the front line of magical law enforcement. Now detectives in the Sorcerous Crimes Taskforce's, Murder Squad, they make a formidable team investigating deaths that the majority of Britain can't explain and will never fully know about.


The Haward Mysteries is a set of Contemporary Fantasy, FREE short stories and bargain priced novels full of magic and mystery with a side of CSI thrown in. Follow the Agatha Christie style whodunits of the novels, delve into the carefully rendered sorcerous science of the magical crimes and explore the enchanted world of the Haward Twins as they face supernatural trials in both their professional and private lives.

The body of a beautiful girl dressed in a ceremonial robe is found on a playground roundabout. Her throat has been ripped out and the roundabout has a bad case of perpetual motion. Is it a ritualistic, magical murder or a setup to distract from the real killer?

That is the question that faces twins, Theo and Remy Haward, detectives in the Sorcerous Crimes Task Force (SeCT), when they are called to the scene in the middle of the night. That and who could commit such an act. They must find the answers to these and other questions, all the while ensuring the general public finds out nothing about the magical world that co-exists with their own.

Armed with their experience, their natural magical abilities and their complimentary instincts, Remy and Theo must identify the victim, follow the evidence and find the killer before anyone else dies.

About the Author: Tasha started writing as a pre-teen and has never stopped. She used to be a software engineer and database designer before she decided to follow her dream to be a writer full time. With her twin sister she created Wittegen Press, a small e-Book press for publishing genre fiction. Her books include novels in the contemporary fantasy, crime and horror genres as well as many short stories and novelettes in every genre from sci-fi to romance. When she's not writing she's usually reading, watching vampire movies, baking or polishing her Photoshop skills.
Posted by Sophie Duncan at 00:00