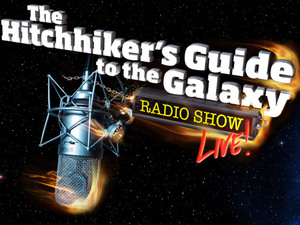 The Hitchhikers Guide to The Galaxy Radio Show Live

Went to see the live show yesterday and it was fabulous! The band were awesome, especially in 'the overture' - even a little nod to other great sci-fi in there :).  The actors were also great and hilarious for (mostly) the right reasons! There's only two more nights, London and Edinburgh left, but if you can nip down to see it, I thoroughly recommend it. Then I have to mention the 'not quite behind the scenes' folks - the people doing the sound effects and much, much more. They just powered the show from soap bubbles to bowls of petunias, and of course, the wonderful new marvin puppet, I've always hated Marvin, but I adored this one, he had a right to be grumpy! - the guy working him was rather cute too :P (Oh yes, and seeing middle-aged men 'groove' - I use the term very loosely, think a-la dad at a disco - to Marvin's song, well, that was hysterical)

They had just the right blend for those of us who are fans, but don't know every line from every book and for the rabid fans, the ones with the towels round their necks and dressing gowns on :)  That was fun too, being around all the fans, I haven't been surrounded by so many fellow geeks since I stopped going to conventions regularly.

Anyway, I now own a babel fish USB stick - yes, I am a sucker for souvenir tat :P And the tour program is brilliant, lots of info to read before and after the show and none of the awful advert crap you get with most show programs.

And finally, two things:
Posted by Sophie Duncan at 09:04