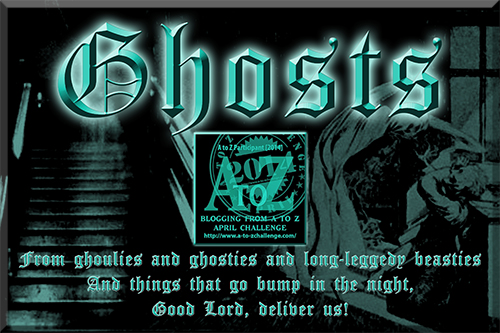 On to L, and today I want to talk about Love in ghost stories. Plus how will Tris and Xander deal with their fight in The Burning Web. Also I'd like to introduce you to the works of Sheridan Le Fanu and the ghostly ladies of the British Isles :)

L is for Love
Love - a strange topic for a theme of ghost stories you may think. Yet love is a universal driver and can be put to use in a ghost story just as it can in other genres.

There is the tragic love, unbroken by death, sometimes to the detriment of the partner who survives. Although he definitely deserves it, Heathcliffe, in Wuthering Heights, is haunted by Kathy, to his death. I would call their relationship one of obsession more than love, but it does fall into the right category.

Love doesn't always have to be destructive, though, it can be a uniting force. I know I keep talking about The Woman In Black, but it has a lot of strong examples in it (and I've already waxed lyrical about Susan Hill), but the love between Arthur and his wife is a saving theme in the story. In the book, her nursing brings him back from fever, and in the movie, well, she is all that stands between Authur and his son, and Jenett Humphrey.

Love makes the world go round and I'm using it in The Burning Web as a window onto Tris and Xander. :)

Tris was still bristling later when there was a knock on the bedroom door. He'd told Xander to piss off when he'd been asked through the door if he wanted supper a while ago and he wasn't in the mood for another confrontation. However, the door opened anyway when he didn't say anything and Xander came in carrying a glass of water in one hand and a plate sporting a doorstop of a sandwich in the other. He walked down Tris' side of the bed, which made him sit up from where he had been brooding, and held out the sandwich and the water. With the plate at eye level, Tris could see that as well as the sandwich, it also contained a scattering of his pills. That was something else in his current mood he would rather have ignored.

However, Xander silently persisted with both his offerings, his face now in efficient neutral. Eventually, a tiny part of Tris' brain informed him he was being an illogical idiot and he took the plate and glass. However, he waited for Xander to turn away before putting down the plate and hooking off the pills. He swallowed them quickly and then, putting down the water, watched Xander start pulling off his shirt and head to the bathroom.

One set of ablutions and a reluctant bite of a very good BLT later and Tris was feeling less angry and more foolish when Xander came out of the bathroom. He was still working out what to say as Xander pulled on some pyjamas, so it was only as his husband climbed into bed and looked at him directly that Tris decided on how to start.

"I am sorry. It was a balance malfunction, I moved too fast. I meant to tell you, but when you came home late and you were so tired, it just went right out of my head."

"So you decided to repeat the experiment but all by yourself at the house today?" Xander asked, speaking quickly, but with a slightly breathless edge to his tone that was all worry and no longer anger.

"Okay, I'm an idiot," Tris agreed as his husband's concern washed over him, "but you'll be pleased to know I didn't spend my whole day alone."

Xander didn't look convinced, but said nothing, so Tris continued, "I met up with Julienne Kernod, the old owner. I spent most of the day with her, she lives in the village. We've decided to look into Berwick House's history together. We start tomorrow."

"Together," Xander repeated and Tris nodded.

"We're meeting at the house at 10.30 tomorrow morning. I will have a chaperone the whole day, I promise."

Tris drew a quick cross over his heart, which made the corner of Xander's mouth twitch up.

"We're going over the letters," he added and then realised there was something else he hadn't told Xander.

His husband didn't need to say anything, the enquiring look was enough.

"You really did look knackered last night, and I was going to tell you. When I fell over, I stuck my hand through the plaster," Tris began and he knew was babbling, but he didn't want to be interrupted. "And Bill and I found a cupboard. There was a bunch of letters in it all tied up with ribbon. They're between the first owner and his second wife when they were courting. Well, it was more of an arranged marriage. They're in my bag, I can get them if you want to see them."

Tris went to get out of the bed, but a much gentler hand on his arm stopped him this time. When Tris glanced back, Xander shook his head, smiled and told him, "Sit down, eat your supper, then clean your teeth and get into bed. I'll look at the letters after we've both had a good night's sleep."

Tris sunk back into his seat, picked up the bitten half of the sandwich and then offered out the second to Xander, because he just knew his husband wouldn't have eaten without him. Xander took the offering and quietly they both sat back to eat. 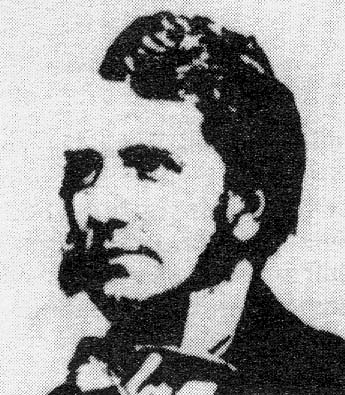 Anyone who reads Victorian ghost stories, will know Sheridan Le Fanu. He was nineteenth century writer and prolific in gothic and mystery stories. His ghost stories fill volumes, most of which, thanks to the Gutenberg Project, you can read for free: Ghostly Tales Vol 1, Ghostly Tales Vol 2, and The House By The Church Yard, to name but a few, in fact, you may just want to check out his amazon page.

Le Fanu is a master of the spooky atmosphere and the macabre fate. He was a leading light in the creation of the Victorian Ghost Story genre and admired by the likes of M R James. He even put his hand to a vampire novella, Carmilla, predating Dracula by a quarter of a century.

British Hauntings: Ladies
The British Isles have more than their fair share of ghostly ladies, every castle has one. We have white ladies, grey ladies, blue ladies, green ladies, even pink ladies, and some of them are more malevolent than others! I'm saving The Brown Lady for a later post, but today I'm going to share some snippets about the other not so delightful inhabitants of our fair islands.

Glamis Castle in Scotland, the childhood home of Elizabeth, The Queen Mother, has two ladies: a grey lady who haunts the chapel there. And a much more macabre one, a woman with no tongue who runs through the castle gardens! It's not just castles that are haunted, either, Uncanny UK, tells us of Mother Marnes, a horrifying apparition whose very appearance in the Gatehouse Pub in Highgate put a man in hospital. Don't worry, though, she only appears when there are no children or animals in the vicinity, so keep a small child with you at all times ;P.

Of all the ladies we have, grey is the most fashionable colour, and there is another grey lady at Castle Rushen on the Isle of Man. She is seen sometimes with a small boy. She is said to be the ghost of a woman who was hanged for the murder of her own son, but after she was executed, the boy was found to have died of natural causes.