New Novel Planning: where do I start? (and it's not as simple as 'at the beginning') 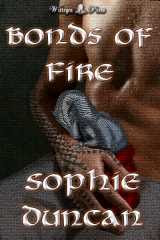 Well, I finally battered my muse into submission and I've focused down on one project (mostly - okay, some of the time, since my brain is still bouncing off to other projects occasionally, but I'm trying to be disciplined). I'm going to start work on turning a novella I've had out for free for a long time, Bonds of Fire, into a full novel. I was just going to write a second short story, but as it began developing in my head, I realised I was creating something more intricately wound with the original story than a simple sequel and I also began to decide that I wanted to expand the original story anyway. It worked as a novella, but I think it can be more as a novel. I want to do the characters more justice, especially the dragons, who were supporting roles in the novella,

So, since I always begin at the beginning when I'm planning a novel, I'm considering the opening scene. The novella plot is definitely where the story begins, it's my Act I, so to speak, but I'm mulling over changing where the action begins.  The novella opens into the aftermath of a battle, Drekken, my central character has been wounded during the battle and separated from his dragon, Miri. Now, even as I say that, the possessive pronoun makes me cringe, because it sounds like Drekken owns Miri and without Miri there, it's quite difficult to explain that she thinks of him as 'her human', it's not possession, it's bonding. I think I did fairly well in introducing the world in the novella, but, being a novella, I can get away with less world building. So, I was considering opening the novel in the heat of battle, showing the team that Drekken and Miri make, plus the role he fulfils in his society. I think it will therefore mean more to the reader when Act I has them split up. It also won't hurt, I don't think, to throw the reader into the thick of it.

I am torn, though, because I like the beginning of the novella. It focuses the reader right in on Drekken from the get go, has him trapped in an uncertain situation, isolated and relying on his own wits alone, which is pretty much the tone of most of Act I. I can't help worrying that the battle scene would contrast too greatly with that and maybe diminish the reunion scene towards the end of that section, because the reader had already met Miri, who, in the novella, until that point, is only a memory for Drekken.

I think what I may do is write it both ways and post both and see what folks think. Sound like a good plan?
Posted by Sophie Duncan at 11:59