W is for Whimsy

When someone say 'whimsy' to me, I think of old England, lazy afternoons where Pooh Bear and Piglet wander in the Hundred Acre wood and the humour is gently jesting on the misunderstandings of a bear of very little brain. :)

I grew up reading the likes of Winnie The Pooh, but I think Disney had a big effect on me here, because I love the short cartoons they made in the 60's that ran and ran at Christmas time in the 80's on TV when I was a little girl. I can still sing the theme song, 'Deep in the Hundred Acre Wood, where Christopher Robin plays...', but I digress ;P, and I may have a soft spot for Pooh and his friends, because my father's name is Christopher Robin. I think these kind of memories, the ones that make me smile softly, are what whimsy is all about. 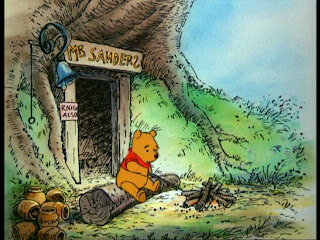 Another beautiful example of whimsy from my childhood is Bagpuss. I've already mentioned him in my post, P is for Purr, but he deserves a bit of a longer mention, because, once again, I have a really soft spot for him. Oliver Postage, who was responsible for Bagpuss and Ivor the Engine, and many more, was local to the area in which I live, around Canterbury, in Kent UK. Bagpuss is olde worlde, harking back to what looks like a 1970's idea of a Victorian/Edwardian era, the time of The Railway Children and Five Children and It. Bagpuss lives in a shop, where Emily, his owner, brings items to be mended that she has found, and thus, he and his friends, the mice, Professor Yaffle, Madeleine and Gabriel (a toad), make up stories around those unusual items in order to work out how to fix them. There are folk songs, simple animations and delighfully eccentric items like one ballet shoe, and a chocolate biscuit mill - wonderful! :)

As I mentioned about Bagpuss, the show harks back to a bygone era, or perhaps one that never really existed. Any era when whimsy is involved is a time of ease and rose tinted spectacles. There is no hardship, no fear, or difficulty, just the occasional fat bear getting stuck in a rabbit's hole, or mice being told off for playing tricks. Whimsy is a place we all like to go from time to time. It makes us smile, not a belly laugh, but maybe a mild chortle or two. It's a rat and a mole messing about on the river. It's even, for those of us who grew up in the 80's, looking back on those quaint old games consoles that played pong. I wouldn't like to spend my entire time being whimsical, because, after a while, it can all feel a bit shallow, but sometimes, a little wander down memory lane can bring a welcome relief to the ups and downs of real life.

The nearest I've come to writing 'whimsy', is in the short stories which form interludes in The Haward Mysteries series, Rite Name and Stockings. One is a collection of two stories set at Christmas, a time when we find it much easier to slip into whimsical recollection than any other, I think. The other is about Theo as a six year old, with Remy in tow, having a small adventure and discovering something about himself. Once again, like Christmas, children make it easier to embrace the whimsical side of the story, especially since the story is written from their point of view. That is something I always loved about Winne The Pooh, the touch of perpetual childhood: owl being spelt W-O-L, and I still call owls wols to this day ;); Pooh's love of hunny;  the sheer delight of a simple game of pooh-sticks. 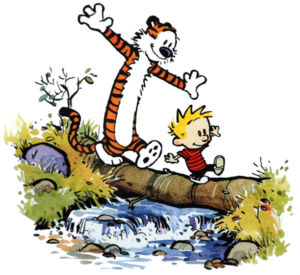 When I want to feel safe and happy - whimsy is the place I go to.