P is for Purr

I declare my allegiance, I'm a cat person - no, I don't have whiskers and a tail, but I do have a fondness for the ol' domestic moggie. I freely admit, I am probably owned by my cat, Ythran, rather than the other way around. This is him below, the fluffy white ball with three legs and only 1/3 of a tail (he had a couple of accidents, one with a car, the other unknown). He's 12 now, so, despite losing two lives, he's doing very well and I am firmly of the opinion that the best kind of hot water bottle is the furry, purring kind. :) 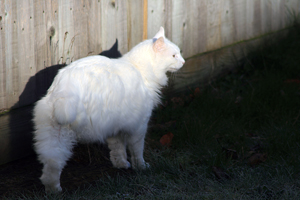 Don't get me wrong, I like dogs too, and we have a wonderful German Shepherd at home as well, called Nemo, but Ythran rules the roost ;P. He even controls Nemo, which is really quite funny, since the cat doesn't even touch Nemo's tummy when he runs underneath him! I am also firmly of the opinion that Nemo thinks he is a cat. As a puppy, he was brought up with eight of them, so when we got him, he was well and truly trained by those cats and he adores Ythran too.

There is something majestic and otherworldly about cats. I don't find it surprising that the Egyptians made them one of the guardians of the underworld and afforded them the status of gods, because they really do command their world, whatever size they may be. Even the cat's behaviour of looking away to be friendly oozes aloof charm. Whether sleek and angular, or huge and fluffy, cats are never inelegant (well okay, not deliberately anyway ;P) and that habitual poise adds to the inscrutable persona they have going on. Cats were not only worshipped as gods, they consider themselves divine whatever humans think.

I've known many cats in my life, some love to be picked up and cuddled, others will leap on a lap, but only on their own terms, and others have been content to keep me company by proximity only. I have to say, I like the huggle-monkeys best, but I've loved them all. My sister recently lost her cat, Levi, he died of old age. When he was young, he was very much in the cool cat bracket, he didn't go in much for laps, or hugs, despite always being a very friendly cat. However, as he got older, he became much more of a lap cat and reminded me of Bagpuss a little, since he was a ginger tabby, definitely saggy and old. He also took to making an incredibly loud miaow when he came back into the house through his cat flap, just to say hello ;). I still miss him waltzing in to say hello when I go and visit my sister. :(

My friends all know I'm a cat person as well, so I have cat statuettes, cat books, cat pictures, even a cat purse, all gifts over the years. I also love cats on film and in literature. The Cat Sat On The Mat was one of the first stories I remember reading as a child. I have no idea who it was by and I no longer have the book, sadly, but it revolved around the fact that wishes were granted whenever a cat sat down on his mat in a big old bus that had been turned into a home (if anyone knows it and can tell me who wrote it, I would be eternally grateful).

I already mentioned Bagpuss, one of my favourite children's series, which I now own on DVD and sit every visiting under-five in front of at the first opportunity ;). Then, of course, there is the Cheshire Cat from Alice in Wonderland, not such a loveable creature, but intriguing instead - I didn't really get him until I was older. Unless he was doing something really evil, I also used to feel sorry for Tom in Tom and Jerry as well. I never sympathised with Sylvester though ;P. My favourite cat out there at the moment has to be Simon's Cat, because he is so like the cat every cat owner has in their memory. I even have a story of my own on the back burner that revolves around cats, plus they will be appearing in the next Haward Mystery.

So, in summary, if you hadn't got it yet, I love cats, big ones, little ones, thin ones, fat ones, cuddly ones and aloof ones. Do you have a favourite cat?