U is for Unbelievable

There are lots of things that happen in this world that are unbelievable, sequences of events that no-one would believe unless they had actually happened, like two people with exactly the same name checking into a hotel at the same time and being given the same room. Now, this may sound unlikely, surely the hotel would realise? However, this has happened to my family. We were at a sci-fi convention in London, and my brother-in-law, Robert Drake, booked us all in to our rooms. However, when my sister went up to their room to take her stuff in, she found a half naked man watching TV. Turns out, he was also called Rob Drake and the hotel had given him her room! That would not have been a problem, but the place was full and the hotel were reluctant to admit their mistake. There was much snarling and thumping of tables, but eventually they found a room.

Now, that co-incidence can be put down to Robert being a common first name and Drake is not so rare either. However, there are much stranger co-incidences out there. Just a quick search on Google brought up dozens on the first page, like the falling baby in the 1930's saved by the same man twice, or twins separated at birth who marry the same kind of woman, sometimes with the same name, and get a similar job. In the real world, we accept these coincidences and just look for explanations, like the baby fell from the same balcony where it was placed at the same time every day and that man happened to be walking home at the same time every day, so him being the one to be in the right place at the right time both times is within the realms of possibility. And with twins, there is the whole, nature vs nurture debate.

There are also all sorts of other weird and wonderful things that go on in this world upon which oracles such as Ripley's Believe it Or Not base their whole raison d'etre. And because there is evidence (some of the time), we believe what we're being told.

However, the writer of fiction has none of these luxuries. There will never be proof of what they are telling their reader, since it is, by it's very nature, from the imagination. So, we have to suspend our reader's disbelief and convince them of the reality we are presenting them with. We have to establish a contract with our reader, help them understand the rules of our created world and we have to persuade them that world could exist, even if only on the page.

Contemporary fantasy, like The Lost Boys, does this by developing those rules in front of us through the protagonist. Sam and Michael comes across the vampires of Santa Carla in different ways, Sam by hearsay and Michael much more directly through Starr and becoming a plaything for The Lost Boys themselves. Both disbelieve, as any normal person would, but the evidence becomes irrefutable when Michael floats out of the window and needs Sam's help. The storyteller here has brought us into the story gradually and shaped our view of the rules of vampires step by step, so that by the time we reach the climax of the story, we fully accept that vampires exist, they're ruthless, dangerous and don't like sunlight.

Fantasy has an advantage over other types of fiction, because often there is the supernatural, or sorcery involved, which can be shaped any way the writer likes, because it's magic. However, Science Fiction, and it's cousin, Steam Punk have a much bigger challenge, because everything is much more grounded in the realm of physical, biological and natural laws. If a writer wants to create the fantastical in these arenas, their readers expect much more precision and reference to these laws. Someone can't just fly up into the air because they whisper a few words of magic, there has to be a contraption, be it natural, or mechanical, or technological that allows them to accomplish this flight and that contraption has to be convincing. 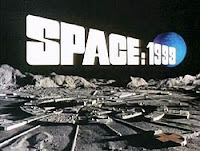 OK, so some sci-fi didn't bother with obeying rules, like Space 1999, that seemed content to ignore the effect that no longer being in orbit of the Earth would have on the moon, and indeed, vice versa. And, one of the things that always makes sci-fi fans laugh is the big explosion sound that happens whenever something blows up in space on TV. Neither of these anomalies stop us enjoying the shows this happens in, but it does allow purists to have a good chortle ;P.

However, then there are some things that should never be explained. I love Star Wars IV, V and VI, the original stories, and folks will debate ad infinitum as to whether they are Science Fiction or Fantasy, but, without a doubt, the Force is, in any other words, magic. It is a power of the mind that only some have the ability to access, it is a legend in its own time and I was very happy not to take the explanation any further than mysticism. Then along came Episode I with it's midi-bloody-chlroians and tried to explain how the Force works - perfect example of thanks, but no thanks for me, I didn't need the explanation, I had already suspended my disbelief, I had bought into the Star Wars universe, Force'n'all.

That doesn't mean I, as a writer, feel free to throw anything into my fantasy work. I want my universes to be coherent in themselves, their own internal rules should be consistent and make sense. That's why Tash, my sister and co-writer of The Haward Mysteries, spent a long time working on the rules of magic that exist within that universe before we started writing. And we also collect the rules we generate as we go along in a wiki, so that we can refer back to them.

So, depending on your genre, some ideas may take a lot more researching than others, but the basic tenet is to be consistent. Breaking your own world rules is a no-no (well unless it's a very clever plot device that shatters rules that characters thought were true, but turn out not to be, and that can take a lot of intricate planning and is not the type of thing I'm talking about here). Breaking rules, without realising/remembering, is a sure way to annoy readers/watchers and throw them out of your universe, so a story bible, I find, is essential. It has more than just world rules in it, it can have character details, locations, objects, all sorts of things, but I always have one, either informally in notes in Scrivener, or more formally like the wiki I share with my sister for Haward Mysteries.

If you're a writer, how do you keep your world rules straight?

If you're not, do you find it a annoying when writers, or TV shows forget their own rules?