Today I'm going to be talking about erotica, specifically of the male/male variety. This post is, however, suitable for a general audience. 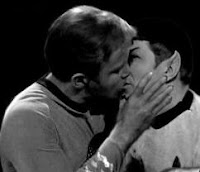 Slash used to be something that was not talked about. Writers could have Kirk (or insert any other male lead in here) ravishing as many women as they liked, but put him with another man and that was a no-no. Even in my time of writing, slash was hidden away on mailing lists where you had to know a friend who would recommend you to be able to get on to read and post. Now, you can just go to A03, or Livejournal and it's one of the most prominent forms of fanfiction. Slash has definitely come out the closet, to the point where journalists are writing articles about it.

However, m/m erotica still has its detractors. Even a little kissing and a flash of arse, which for heterosexual romance would be considered tame, can get bad reviews, just because it's two guys. I have personally had this happen. I wrote a novella called Bonds of Fire. It's a sweet little piece really, written as a request for baby dragons and augmented humans. It's predominantly fantasy with an edge of sci-fi and happens to have a romance in it, something that if it was het, would not need mentioning in the description. Yet, some of the 1 star reviews for it on Amazon are complaining about the 'awful sex' and one even suggested it was an old man chasing after young boys and was disgusting (I think that person misunderstood my use of the term, boys, because, had they read the story, they would have understood that the men involved are all adults).

Just to make it clear, there is no sex in the story, just some titillation, and, as I said earlier, a flash of bum, but because it is m/m, not m/f, the reaction is much more visceral from those who aren't comfortable with m/m romance. Thus, my description now contains a classification telling readers that there is a m/m romance in the story.

I have to say, I've had many more positive reactions to my erotica than negative, so I'm not going to let a few 1-stars put me off writing it. I really enjoy writing erotica, I love the human (and sometimes not so human) interactions, romance, the slowly building relationships, or even hot, passionate encounters where deeper emotion comes later.

Something that always runs through erotica for me is that emotional connection, without the involvement of the whole character, be he a thief off the streets of London, or a fae prince, there is no story. Erotica/slash is all about character, how lovers react to each other, their joy, their sorrow, their hatred even and it can have so many dimensions.  It's not just sex.

P.S. Check out other folk doing the A to Z April Challenge.
And if you want to see my other posts: